Seven wonders of Kharkov are seven historical and cultural monuments, which in July 2008 were elected through Internet voting at the contest. Among them – Gosprom (House of State Industry), Mirror Stream, Cathedral of the Intercession of the Blessed Virgin, Holy Annunciation Cathedral, Assumption Cathedral, House with a spire, a monument to T.G. Shevchenko. During 2009-2010, on their Square of Architects (Beketov underground station) were placed their small copies (total area photo).

Gosprom (House of State Industry) is the first 13-story skyscraper of the territory of the former Soviet Union, an architectural monument in the style of constructivism. The house has a high aesthetic potential and functionality, its construction is compared with a "communication jump". In the 1920s, this architecture was a novelty not only in Europe, but all over the world. The construction was carried out in a short time - during 1926-1928 years (architects - Sergey Serafimov, Samuel Kravets, Mark Felger). The building is part of the ensemble of the central square of Kharkov – Freedom Square. Now in Gosprom there is one of the largest in Kharkov subdivisions of the regional state administration, galleries, and regional television. Now the height of the Gosprom building is 63 m., and together with the first television tower, installed in 1954, is 108 meters. The volume of the structure is also impressive with its size of 347 000 m³. The building was repeatedly used as a symbolic image in literature and art. 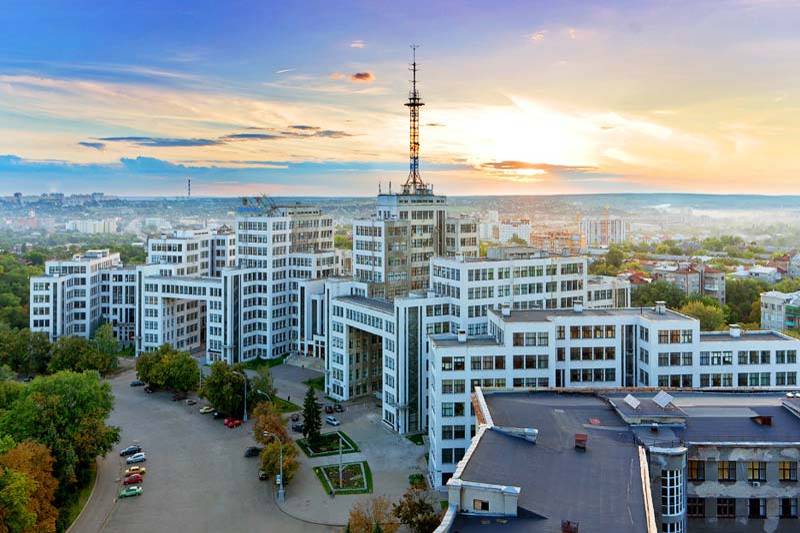 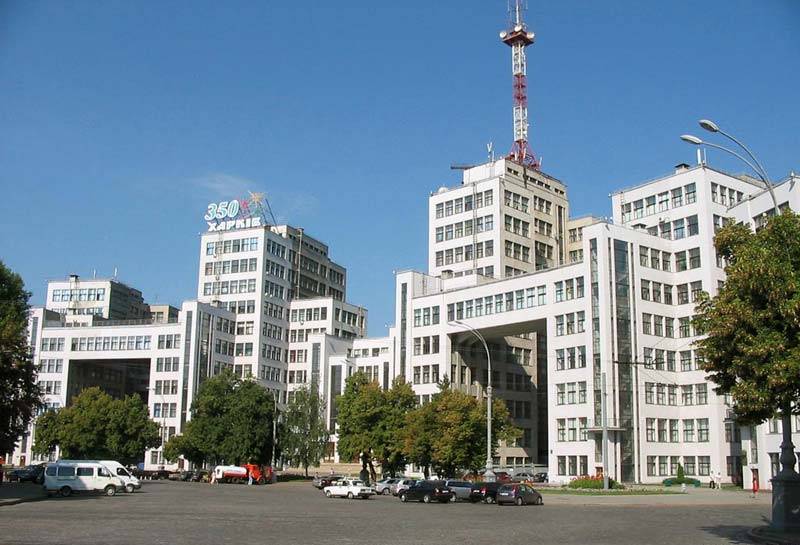 Arbor and the fountain "Mirror Stream" is one of the modern symbols of the city. As one of the best architectural monuments of Kharkiv, it is included in the encyclopedia of UNESCO. It was built in 1947 (architect - Victor Korzh) along Sumskaya street opposite the Kharkov National Academic Opera and Ballet Theater named after N.V. Lysenko. The building is the central part of the square located here. Here is a memorable sign to the famous Kharkov colonel, the legendary Ukrainian Ataman Ivan Sirko (1610-1680) with his winged expression "Slaves are not allowed into Paradise". In 2007, an reconstructed fountain was built, during the reconstruction of which 135 searchlights were installed. Particularly beautiful is the place for romantic dates in the evening – the fountain shines with different colors, which makes it incredibly beautiful. From the end of the last century the Kharkov confectionary factory produces chocolate sweets "Mirror Stream" with a picture of the monument on the packaging. 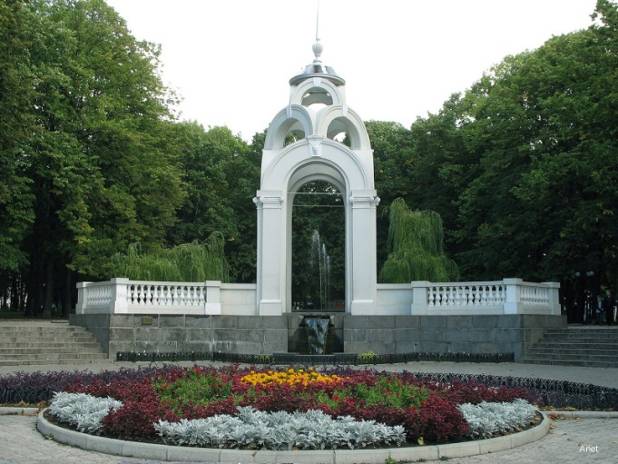 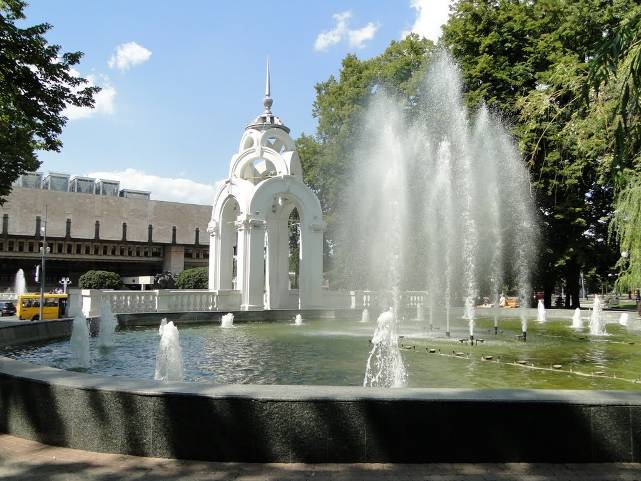 Cathedral of the Intercession of the Blessed Virgin Mary

The Intercession Cathedral is the only fragment of the building of the Kharkov fortress from the second half of the 17th century, which has survived to the present day. In 1689, it was built by the Cossacks as part of the fortifications. It is a valuable monument of Ukrainian architecture of the second half of the 17th century, a unique and brilliant phenomenon of stone architecture. Very light and slender, from a distance the cathedral reminds three candles that stand in a row. Today it is part of the ensemble in the Pokrovsky Monastery, on the territory there is a church in the name of the Ozeryanskaya Mother of God, the Kharkov Bishop's Residence and a theological seminary into which the Kharkov Collegium was reorganized. It was there that during 1759-1764 years the outstanding Ukrainian teacher, poet and philosopher Grigory Skovoroda taught. During the years 1799-1846 Pokrovsky Cathedral was the cathedral of the city. Today it is the oldest stone monument of architecture of national importance in Kharkov. 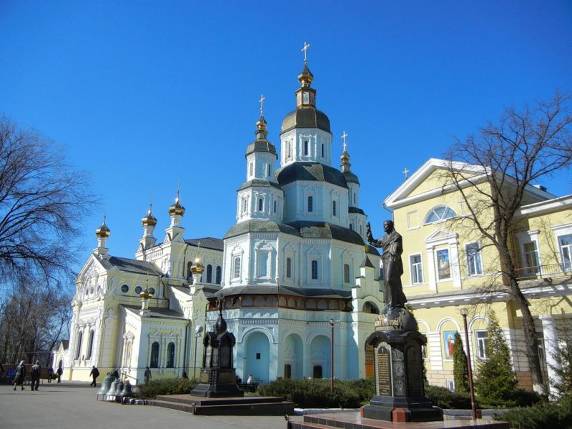 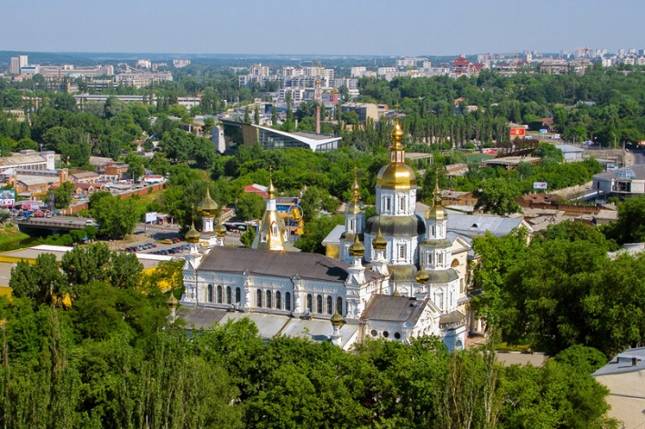 The Holy Annunciation Cathedral is the largest cathedral of Eastern Europe, belongs to the Kharkov diocese of the Ukrainian Orthodox Church of the Moscow Patriarchate. The temple was built during 1889–1901 years (architect - Mikhail Lovtsov) in the neo-Byzantine style with elements of eclecticism. The cathedral impresses with its dimensions – 34 meters of facade, 59 meters in height and 80 meters long pseudo-gothic tiered bell tower. The cathedral can accommodate 4000 people. A large number of details and a polychrome solution of facades with alternating horizontal rows of red brick and bright plaster create a unique image of the temple, which is easily remembered.. 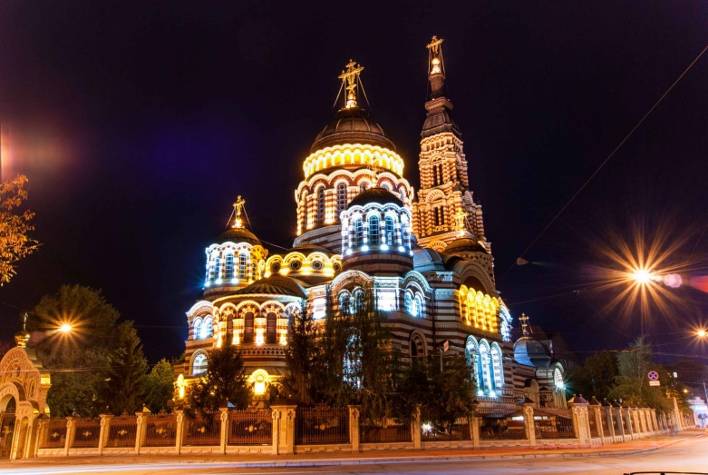 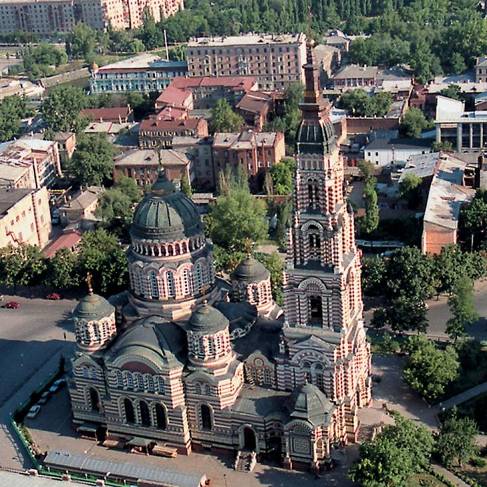 Assumption Cathedral is the construction of the ancient Orthodox Church of Kharkov, a monument of architecture of national importance. The modern building was built in 1771-1777 by the means of the clergy and Kharkiv citizens. The belltower of the cathedral was built in the XIX century. In honor of the victory in the war with Napoleon. It is made in neoclassical style, and the height reaches 90 meters. At the time of construction was one of the highest in the Russian Empire, now – the third tallest building in Kharkov.

The cathedral is located in the central part of the city, on the University Hill, the bank of the Lopan River. It can be seen from anywhere in the city center. After the restoration in 1986, the House of Organ and Chamber Music was opened in the cathedral, where the masters of the well-known Czech company "Rieger-Kloss" made and installed the organ. By the 350th anniversary of Kharkiv Ukrposhta in 2004, a postage stamp was made, which depicts the bell tower of the Assumption Cathedral, and the National Bank of Ukraine issued a coin of 5 hrivna, depicting the bell tower of the cathedral on the obverse. 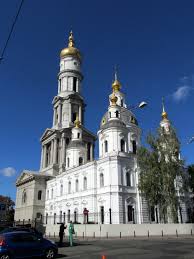 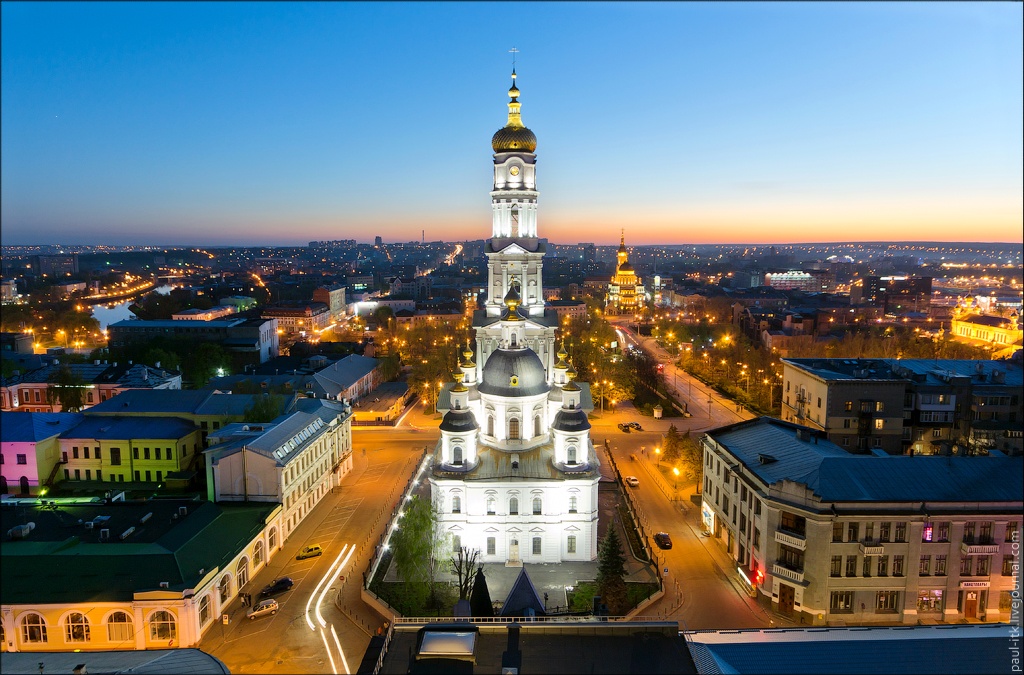 House with a spire

Residential house with a spire is a 12-story historic skyscraper. It was built during 1950-1954 in the style of the so-called "Stalin Empire" (architect P. Oreshkin). In 1954, the main seven-story part of the house with an eleven-story tower crowned with a spire was completed. This spire also gave a general name to the structure. The house is a high-altitude dominant of the space and occupies a whole block on the Constitution Square, which is bordered by Korolenko Lane, Moskovsky Avenue and the Armenian Alley. The height is 7-11 floors 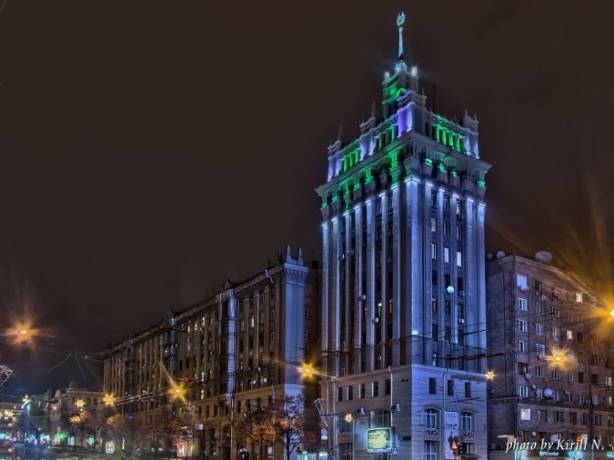 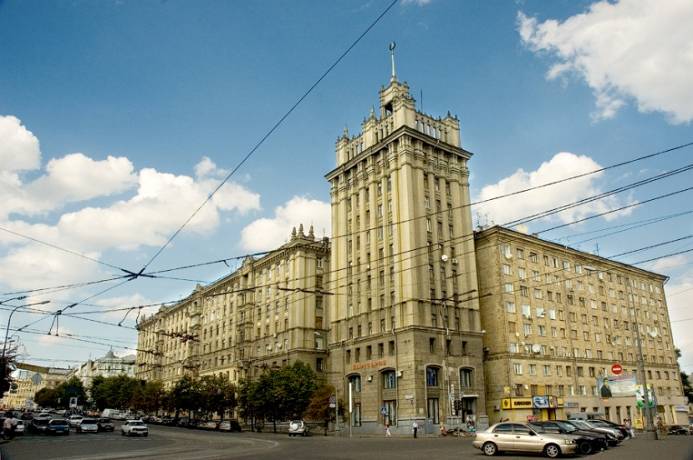 Monument of the outstanding poet of Ukraine, built in 1935 at the entrance to the garden. T. Shevchenko (Sumskaya Street). The monument is considered the best among more than 250 other monuments of the great writer in the whole world. The authors of the monument are the sculptor Matvey Manizer and the architect Joseph Langbard. The monument was inaugurated on March 24, 1935. The artistic style of the monument can be defined as social realism and Stalinist baroque. The 16.5-meter monument includes a bronze statue of the poet (5.5 m), stands on a round pedestal made of natural silicate, which is surrounded by 16 smaller bronze plaques reflecting the history of Ukraine and the heroes of his works. According to the plan of the sculptor, the figures must be viewed in the sequence of the compositional spiral, starting from the figure "Katerina" - statues of a woman with a baby in her arms, sung by T.G. Shevchenko in the poem of the same name; The embodiment of the image of a woman mother under the burden of loneliness and sadness; And moving counter-clockwise.

This monument of T.G. Shevchenko is officially recognized as the most beautiful in Europe. 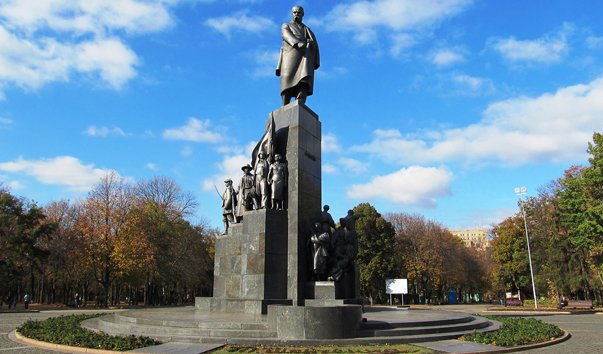 We have 895 guests and no members online